Perhaps the only such collection to be published in Libya in recent years, خراريف ليبية (Libyan Fairytales) is an anthology of fairytales collected in the Jabal Akhdar region of eastern Libya by the folklorist and short-story writer Ahmad Yusuf ‘Agila.

The book presents thirty-four fairytales, many of which— such as ام بسيسي or نقارش or عويشة بنت السلطان—are well-known to Libyans. ‘Agila also includes a lexicon of the more unusual words used in the tales; some are truly uncommon, while some (such as شرز for سرج ‘saddle’) are simply the local pronunciation of a common word.

Many younger-generation Libyans, or those who grew up in the diaspora, may not have heard many fairytales as children. This book is particularly useful for those groups, who may want to familiarize themselves with the tales their parents grew up hearing but no longer remember. Also, because ‘Agila attempts to render the eastern Libyan dialect as accurately as possible, the tales can be read aloud to friends and family members—thus keeping at least some Libyan fairytales alive.

‘Agila’s introduction to the book, as well as samples of some of the fairytales can be found at this link.

Abstract: Awjila Berber is a highly endangered Berber variety spoken in the East of Libya. Only minimal material is available on the language. This is unfortunate, as that material reveals that the language is in some respects very archaic and in others grammatically unique, and as such is of particular comparative and historical interest. Fieldwork has been impossible for decades due to the political situation, leading to uncertainty about whether the language was even still spoken. With the rising popularity of Facebook, however, more and more Berber speakers are taking to Facebook to converse in their own language. Several inhabitants of Awjila have accordingly set up a Facebook page Ašal=ənnax “our village” where they communicate with one another in the Awjila language. The authors have collected a corpus of the conversations on this Facebook page, which have been transcribed and translated. Analysis of this corpus adds substantially to our knowledge of Awjili and its situation. The posters’ discussion of their motivations for using the language cast light on the language’s prospects for survival, while the posts themselves yield many previously unattested words. At the same time, the corpus provides a case study in language contact. Examination of the grammatical and lexical features of this “Facebook-Awjili” language reveals that these speakers’ usage is heavily influenced by Arabic, showing extensive language attrition absent from earlier data. The resulting constructions show parallels with other contact-heavy varieties, notably Siwi. In both respects, this study casts light upon the uses and limits of social media as a source of linguistic material.

The article is not yet available online, only in the print version, but we will link to a PDF as soon as one is available.

Khaled Mattawa is a renowned Libyan-American poet, in addition to being a prolific translator of Arabic poetry into English and scholar of Arabic literature. He is a member of the American Academy of Poets and was recently in the news for being named a recipient of the MacArthur “genius grant” fellowship. Mattawa has published four books of his poetry in English:

In the aftermath of killing of Libya’s former dictator, he wrote the  poem, “After 42 Years”. You can listen to him reading it here.

This week a major achievement for the Libyan arts has been accomplished: the publication of Libya:Hurriya, the Imago Mundi catalog for Libyan contemporary art. Under the curatorship of the tireless Najlaa Elageli and Noon Arts, the Libyan contribution to the Benetton Collection’s contemporary art project—producing an illustrated catalog of contemporary artists from every country—has finally been realized. For the first time, there will be a widely-available book containing the work of Libyan artists. Libyan art has often been overlooked in works on, and exhibitions of, contemporary Arab art, and information on the artists and their work is incredibly hard to find. But now, everyone can have this beautiful book in their home and/or exhibit space, helping to spread the knowledge that interesting art is being made in Libya and by Libyans too. 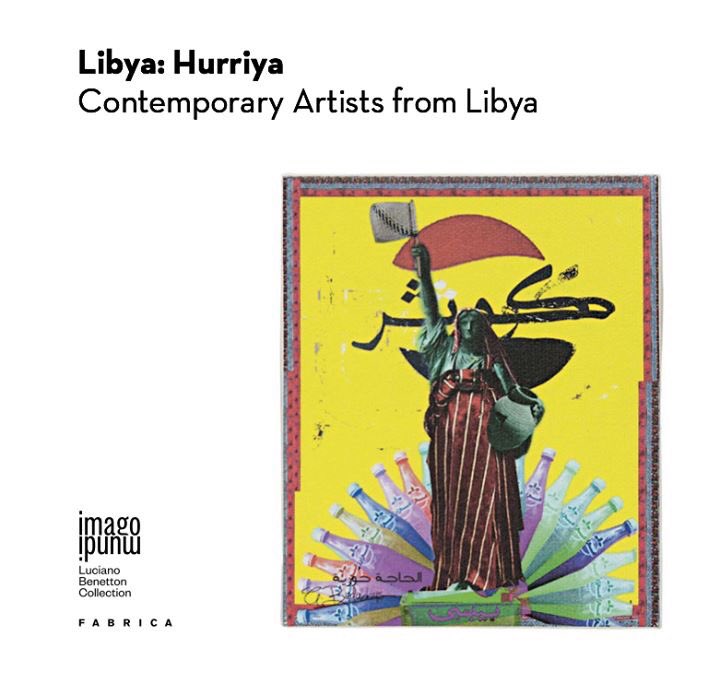 The work selected for the catalog can be browsed online here and includes dozens of artists, some well known to Libyans and some less well known. Congratulations to Najlaa Elageli and all the artists on this milestone!

The catalog is available for online purchase at an extremely reasonable price and can be shipped anywhere in the world.