Available freely online is a special journal issue from 2013, based on a workshop which took place in 2011, on the theme “Tripoli, port to the sea, port to the desert” in Paris. The special issue contains 7 articles, all in French, about different aspects of pre-modern to early-modern Tripoli. All articles can be read online as well as downloaded.

A new volume containing linguistic studies of Arabic dialects in Libya and Tunisia has just been published:
Tunisian and Libyan Arabic Dialects: Common Trends – Recent Developments – Diachronic Aspects, edited by Veronika Ritt-Benmimoun. Zaragoza: Prensas de la Universidad de Zaragoza, 2017.
The publisher’s description reads: “This tripartite volume with 18 contributions in English and French is dedicated to Tunisian and Libyan Arabic dialects which form part of the so-called Maghrebi or Western group of dialects. There are ten contributions that investigate aspects of Tunisian dialects, five contributions on Libyan dialects, and three comparative articles that go beyond the geographical and linguistic borders of Tunisia and Libya. The focus of “Tunisian and Libyan Arabic Dialects” is on linguistic aspects but a wider range of topics is also addressed, in particular questions regarding digital corpora and digital humanities. These foci and other subjects investi­gated, such as the syntactic studies and the presentation of recently gathered linguistic data, bear reference to the subtitle “Common Trends – Recent Developments – Diachronic Aspects”.”
Several essays in the book deal with aspects of Libyan Arabic dialects, in particular the following: In Voices of the Arab Spring, edited by Asaad al-Saleh (Columbia, 2015), there are sections devoted to personal stories from the revolutions in different Arab countries. The section on Libya contains several essays:

This is not a post about Libya now. This is a post about a book from 1975, not so long after the coup of ’69, when ‘new’ was accurate in some senses but not necessarily positive. Entitled La Libye nouvelle, subtitled rupture et continuité (rupture and continuity | المزق و الاستمرار), it could easily have been just published last year and be talking about you-know-which-recent-events. A rather dramatic turn of history, cue experts publishing books. (Sometimes the lack of new perspectives is painfully obvious: there was a book titled … La nouvelle Libye published in 2004). In between, far, far fewer people are interested in Libya. Their loss. But I’m getting off track: the point here is that a number of scholarly works published in France have been made available free online at the OpenEdition.org website. Hence La Libye nouvelle can be read online for free (if you read French). 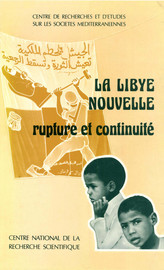 Although some essays are outdated or rather simplistic, a few are still interesting reads. I recommend “La Libye des origines à 1912” by Robert Mantran; “Introduction à la connaissance de la littérature libyenne contemporaine” by Noureddine Sraieb is still one of the very few essays in a Western language addressing Libyan literature; “Chronologie libyenne” by Béatrice de Saenger is a handy timeline of events (obviously till 1975).

“Women’s Bodies in Post-Revolution Libya: Control and Resistance” by Sahar Mediha Elnaas and Nicola Pratt. In Rethinking Gender in Revolutions and Resistance: Lessons from the Arab World. London: Zed Books, 2015.

“Ever since the uprisings that swept the Arab world, the role of Arab women in political transformations received unprecedented media attention. The copious commentary, however, has yet to result in any serious study of the gender dynamics of political upheaval.

Rethinking Gender in Revolutions and Resistance is the first book to analyse the interplay between moments of sociopolitical transformation, emerging subjectivities and the different modes of women’s agency in forging new gender norms in the Arab world. Written by scholars and activists from the countries affected, including Paletine, Egypt, Tunisia and Libya, this is an important addition to Middle Eastern gender studies.”

Read a review and discussion of the book at Jadaliyya.

Unfortunately the collaboration seems to have not continued, at least in published form. But all three books are very worthwhile collections for those looking for thoughtful and unique perspectives on the colonial period in Libya.