On the anniversary of the revolution, we’re sharing a new article by Leila Tayeb, “Our star: Amazigh music and the production of intimacy in 2011 Libya” out in the Journal of North African Studies, about the music of Libyan Amazigh singer Dania Ben Sasi during the events of the 2011 revolution.

This article explores the production and circulation of Amazigh music among Libyans between 2011 and 2013. It takes as a focal point the performance archive of Serbian-Libyan Amazigh singer Dania Ben Sasi, whose Amazigh-language music found unprecedented fame in Libya in 2011. Through close readings of her initial musical recording of that year, interviews with Ben Sasi and listeners, analysis of performances onstage and in daily life, and drawing on ethnographic fieldwork undertaken in Libya, Serbia, and Tunisia, I present a brief history of a temporary moment of political possibility. I suggest that the formation of an intimate public around Amazigh music in Libya offered glimpses of an unfinished future in which popular practices of recognition could still be built.

The article appears to be freely accessible online at the above link. 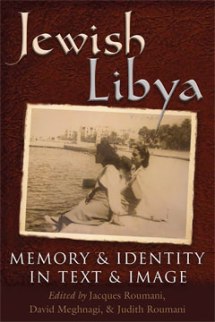 A new book, Jewish Libya: Memory and Identity in Text and Image, edited by the Libyan Jewish writers and scholars Jacques Roumani (†), David Meghnaghi, and Judith Roumani, is coming out soon from Syracuse University Press. It includes chapters on Libyan Jewish language, cuisine, history, social change, women, diaspora, and biographical and liturgical literatures. Update: for those who have access, the book is available online at Project Muse.

From the publisher’s description:

“In June 2017, the Jews of Libya commemorated the jubilee of their complete exodus from this North African land in 1967, which began with a mass migration to Israel in 1948–49. Jews had resided in Libya since Phoenician times, seventeen centuries before their encounter with the Arab conquest in AD 644–646. Their disappearance from Libya, like most other Jewish communities in North Africa and the Middle East, led to their fragmentation across the globe as well as reconstitution in two major centers, Israel and Italy.

Distinctive Libyan Jewish traditions and a broad cultural heritage have survived and prospered in different places in Israel and in Rome, Italy, where Libyan Jews are recognized for their vibrant contribution to Italian Jewry. Nevertheless, with the passage of time, memories fade among the younger generations and multiple identities begin to overshadow those inherited over the centuries. Capturing the essence of Libyan Jewish cultural heritage, this anthology aims to reawaken and preserve the memories of this community. Jewish Libya collects the work of scholars who explore the community’s history, its literature and dialect, topography and cuisine, and the difficult negotiation of trauma and memory. In shedding new light on this now-fragmented culture and society, this collection commemorates and celebrates vital elements of Libyan Jewish heritage and encourages a lively inter-generational exchange among the many Jews of Libyan origin worldwide.”