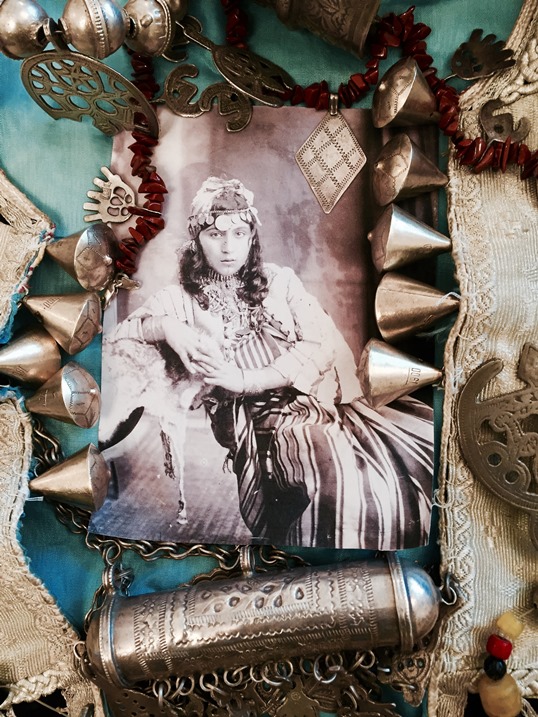 The exhibition Jewelled Tales of Libya, curated by Najlaa El-Ageli and Hala Ghellali, will take place at the Arab British Centre from 19 to 27 January 2017.

Jewelled Tales of Libya is a rare exhibition which will explore the diversity and historical identity of a country through its tradition of fine jewellery. By showcasing this rich cultural heritage, the exhibition aims to tell the stories behind the adornments and symbols that feature heavily throughout the geographical expanse that we know as Libya.

Alongside a display of 45 pieces of authentic Libyan silver jewellery from the 1920s to 1960s (comprising chokers, belts, headpieces, bangles, silver slippers amongst many other pieces), the exhibition will show 13 original vintage photographs, that belong to the curators’ private collections. Dating back to the early decades of the 20th Century, the images of Libyan women were taken by the Italian cameramen, (such as Aula, Nascia, Rimoldi and others),who established studios in Libya during the European colonisation and who contributed to the Orientalist strand of photography.

In contrast to this old collection, the exhibition will also feature more recent photographs taken by the talented Libyan photographer Sassi Harib, whose work captures the essence of Libya’s Southern women adorned in their jewellery.

Furthermore, Hala Ghellali, one of the curators, will be giving a talk about Libyan jewellery, its symbolism and the history of silver making in Libya on 24 Jan, 6:30pm – 7:30pm @ The Arab British Centre (admission is free).

Libya’s foremost research journal for history, in its broadest conception, is the مجلة البحوث التاريخية (Journal of Historical Research), published by the Libyan Center for Historical Studies.* Since 1979, the journal has consistently published articles by Libyan scholars, as well as several well-known European scholars writing in Arabic, on a very broad array of topics. In many cases, in fact, there is little or no research published outside of Libya on these topics, and the journal therefore offers extremely valuable insight into the range of possibilities for research as well as useful starting points for those who can read Arabic. Unfortunately, it is difficult to come by in European or American libraries (in London, the SOAS library has many of the issues)—a goal for the appropriate authority in Libya would be to make back issues available online. The website of the Center shows issues from 2013 as being the most recent. Although it seems not to have been updated for some time now, later issues are not known to me. I hope the journal is still alive.

The inhabitants of the small oasis of Tawargha (تورغاء) outside of Misrata have suffered a great deal as a result of recent conflicts in Libya. The majority of Tawarghans are people often referred to in Libyan society as “black Libyans”, in order to draw attention to their sub-Saharan African ancestry (I prefer the term “Libyans”, since they are Libyans like everyone else). Unfortunately, most people make little effort to understand them or their history.

This being the case, I thought it important to share an article written about Tawargha fifty years ago by the linguist Umberto Paradisi, known mainly for his work on Libyan Berber. He also apparently noticed that  many Tawarghans were Black (about 4600 of a population of 5100 in 1936, apparently), and wrote an article for the popular magazine Le Vie del Mondo about it (he also wrote popular articles for this magazine about Tripoli, Ghadames, and other places in Libya). That this particular social situation was the case fifty years ago, and goes back even long before the colonial period, further shows that the recent forced displacement of Tawarghans by local militias is based on scapegoating and racism—they have been a part of society for as long as the concept of ‘Libya’ has existed. The reason for the unique demographic of Tawargha goes back to an unfortunate, but inescapable, part of Libyan history: the slave trade. This much is implied by the pejorative term shushan (plural shawāshna) used in the article, and even sometimes now, to refer to the Tawarghans and other Libyans ultimately descended from enslaved people. We need to understand these histories and work to rectify, rather than repeat, them.

Here is a scan of the article (in Italian), entitled “I sudanesi di Tauórga” and published in Le Vie del Mondo (February 1956). It uses the dated and inaccurate way of referring to Black people in Arab societies as “Sudanese”, though this is unsurprising given the era and the colonial venue it was published in. It also has several photographs showing various aspects of life in Tawargha such as date cultivation and textile making.