This edition of the research roundup includes sources on primarily colonial Libya from various perspectives, as well as some more recent works on topics such as cultural heritage. 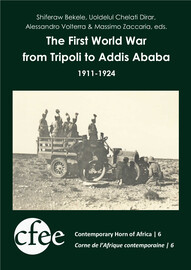 In the spring of 1931, Italian colonial authorities ordered the construction of a fence on the border between Libya and Egypt. By September, 270 kilometres of cement, chain-link fence, and barbwire stretched from the shores of the Mediterranean to the Oasis of Jaghbub. Italian authorities constructed the fence in order to deny Omar al-Mukhtar and his resistance fighters safe-havens and material support in neighbouring Egypt. Thus Cyrenaica, the eastern province of Libya, which was already completely separated from Tripolitania (Libya’s western province) by the desert of Sirtica, had now been also cut off from Egypt to the east of the fence. The peoples of Cyrenaica, particularly those living on the fertile highlands of the Jebel Akhdar, were the major source of support for Omar al-Mukhtar’s anti-colonial insurgency. The year before the fence went up, Italian authorities ordered the deportation and internment of between one-half and two-thirds of the civilian population of Cyrenaica—between 90,000 and 110,000 people

The Italo-Turkish War (1911-1912), now remembered primarily as Italy’s war for what is now Libya, swelled from a localized colonial invasion into a significant Mediterranean conflict and a global cause célèbre that attracted support and aid for the embattled Ottoman regime from diverse locations both inside and outside the borders of the empire. This dissertation examines the means by which the Ottoman Empire erected an asymmetric defense of its last North African provinces to preserve its territory and empire from Italian occupation and annexation. Drawing on sources in Ottoman Turkish, Arabic, Greek, and Judeo-Spanish, this study demonstrates how the Sublime Porte and the Committee of Union and Progress (CUP) initially deployed a rhetoric of unity, constitutionalism, and international law to protect the empire from the Italian invasion. Due to the efficacy of Italian diplomacy, the Ottomans, unable to enlist Great Power support for the preservation of imperial territory, developed a defensive strategy for its North African territories that relied primarily on humanitarianism and volunteerism. This dissertation, therefore, investigates the vital contribution of pan-Islamism and the broad appeal of a loose ideology of Muslim anticolonialism in the empire’s attempts to bolster its forces with international aid and volunteers. While many studies tend to brush aside the importance of early twentieth-century pan-Islamism as either a pipe dream of Wilhelmine champions of German imperialism and their Ottoman collaborators or as merely a rhetorical movement devoid of substantial consequence, this dissertation reveals how global appeals to Islamic unity to combat European expansionism translated into material benefits for Ottomans on the battlefield. Through an examination of documents from the Turkish Red Crescent and the Turkish General Staff archives, it highlights the crucial assistance of global Islamic humanitarian aid to the Ottoman war effort in the form of sizeable financial contributions to the Ottoman Red Crescent from Muslims over the duration of the conflict. The Red Crescent organization provided a means to funnel aid to the battlefield collected in mosques, mass meetings, newspaper subscriptions, and Islamic associations within and without the Ottoman Empire. This charitable aid facilitated the deployment to North Africa of multiple Red Crescent teams which assumed, in most cases, sole responsibility for the medical care of both soldiers and civilians of the Ottoman provinces. Simultaneously, the Ottoman ranks in Tripolitania and Cyrenaica swelled as calls for coreligionist volunteers to take up arms were heeded throughout Africa and Asia. Ultimately, the empire’s anticolonial ideology proved an effective unifier for the many Muslims around the world who shouldered a great deal of the cost of the conflict. While Italy’s expenses for its war for colonial expansion ballooned, the defense of North Africa cost the Ottoman treasury very little.