Here is my occasional roundup of published research on Libya in the humanities and social sciences which I find interesting or useful. I’ll also slowly be gathering some of the older individual posts on this blog into collective roundup posts. 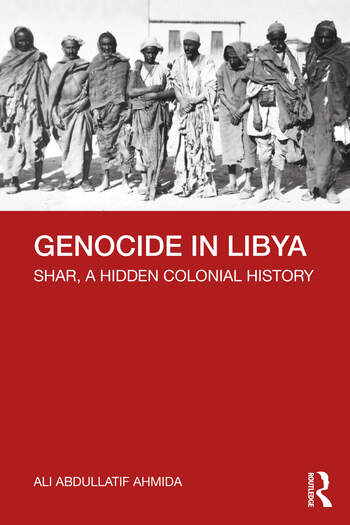 This original research on the forgotten Libyan genocide specifically recovers the hidden history of the fascist Italian concentration camps (1929–1934) through the oral testimonies of Libyan survivors. This book links the Libyan genocide through cross-cultural and comparative readings to the colonial roots of the Holocaust and genocide studies.
Between 1929 and 1934, thousands of Libyans lost their lives, directly murdered and victim to Italian deportations and internments. They were forcibly removed from their homes, marched across vast tracks of deserts and mountains, and confined behind barbed wire in 16 concentration camps. It is a story that Libyans have recorded in their Arabic oral history and narratives while remaining hidden and unexplored in a systematic fashion, and never in the manner that has allowed us to comprehend and begin to understand the extent of their existence.
Based on the survivors’ testimonies, which took over ten years of fieldwork and research to document, this new and original history of the genocide is a key resource for readers interested in genocide and Holocaust studies, colonial and postcolonial studies, and African and Middle Eastern studies.

There is an illuminating interview with the author on Jadaliyya, in addition to one on the New Books Network.

This paper intertwines the two historiographical concerns of migration and colonialism by exploring the case of Italian rule in North Africa from 1922 to 1943 and by adopting the analytic ground of the environment. The role played by the environment in targeting and shaping specific social groups, forming and grounding specific policies, creating and preventing social and natural transfers, has been overshadowed until now, particularly in relation to Italian colonialism. This study articulates the Fascist agricultural enterprise in Libya around the watershed event of the colony’s 1932 pacification. To illustrate its development, it looks at the environment-making processes and transfers entailed in the transformation of the Italian colonial project. This reconstruction contributes to the environmental history subfields of migration and colonialism and invites historians to further explore the first decade of Italian rule in Libya and not to limit historical explorations to the lens of settler colonialism.

This article assesses the Liberal and Fascist administrations’ shifting attitudes towards colonial concubinage during the years of the repression of the anti-colonial resistance in Italian Libya (1911–32). Also known as mabruchismo, concubinage in Libya closely resembled its counterpart in Italian Eastern Africa, as it involved middle- to upper-class Italian officers coercing colonised women into engaging in often exploitative intimate relationships. During the first 20 years of colonisation of the territory, the colony’s military administration employed an ambiguous stance regarding the practice, condemning it discursively to ingratiate itself with the local elites while unofficially allowing it to provide safe sex to its officers. When the resistance was defeated in the early 1930s, and the Fascist administration began its demographic colonisation plans, colonial concubinage was prohibited as out of place in a racially segregated settler colony. This article employs an analysis of official archival sources to trace the regulatory framework that shaped the lives of the Libyan women and Italian officers engaged in concubinage in a shifting colonial society. The colonial administrations’’ regulatory efforts toward colonial concubinage testify to the crucial role that Libyan women and racially ‘‘mixed’’ relationships played in shaping categories of race, class, and gender relative to the Italian colonial context.

By mid-nineteenth-century, European powers became interested in Libya as a valuable asset to their colonial expansion into North Africa. In the context of fascist Italy, explorers such as Emilio Scarin gathered geographic, demographic, and ethnographic knowledge central to the establishment of colonial settlements. However, Italian knowledge of Libya bore within it the sedimentation of decades of descriptive accounts that developed in response to pre-1911 colonial projects in Libya, such as ﬁnding a route to the Niger (Lyon-Ritchie), opening trade relations with colonial possessions in Central Africa (Duveyrier), and determining the autochthony of Libyan and North African Jewry (Slouschz). These discursive antecedents were important to Italyʼs “Libyan colonial archive” and its colonial interests, military and economic. The knowledge produced as part of the Italian colonial occupation of Libya can be shown to have contributed to British ethnological knowledge, especially as advanced by Edward Evans-Pritchard. Focusing on Fascist rule of Libya, this article highlights how intelligence gathering imperatives drove and in ﬂuenced military reports and writings about Libya and its inhabitants from the early-nineteenth to the mid-twentieth centuries. I argue that while motivated by colonial economic interests, this ethnological archive emerged in relation to and in conversation with other European colonial projects in the larger Maghrib

Of tangential interest is Chapter 5 of Arthur Asseraf’s Electric News in Colonial Algeria (Oxford, 2019), which assesses Algerian reactions to the Italian invasion of Libya and the British mandate in Palestine; Asseraf shows that to some extent, these conflicts enabled Algerians to speak about their own occupation without criticizing the French directly and thereby coming under the strict censorship laws. See this interview with the author on New Books Network. 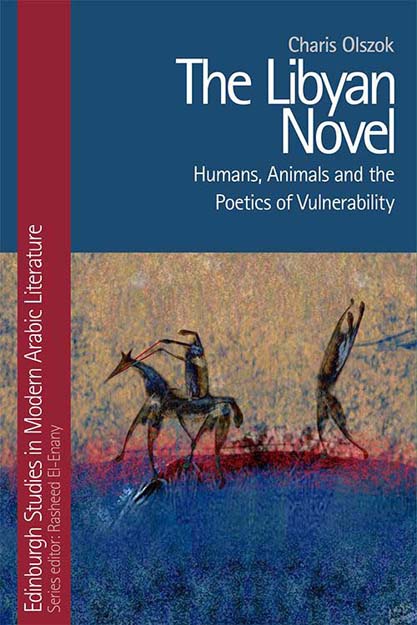 Charis Olszok, The Libyan Novel: Humans, Animals and the Poetics of Vulnerability (Edinburgh, 2020)

Analysing prominent novelists such as Ibrahim al-Kuni and Hisham Matar, alongside lesser-known and emerging voices, this book introduces the themes and genres of the Libyan novel during the al-Qadhafi era. Exploring latent political protest and environmental lament in the writing of novelists in exile and in the Jamahiriyya, Charis Olszok focuses on the prominence of encounters between humans, animals and the land, the poetics of vulnerability that emerge from them, and the vision of humans as creatures (makhlūqāt) in which they are framed.

As Libya transforms into a dictatorial, rentier state, animals represent multi-layered allegories for human suffering, while also becoming focal points for empathy and ethics in their own right. Within reflections on Italian colonisation and ensuing forms of political and social oppression, concomitant with oil, urbanisation, exile and war, staged in remote deserts, isolated coastlines and neglected city parks, The Libyan Novel examines how physical, emotional and intellectual hardship prompts empathetic gazes across species lines. Through engagement with the folkloric and Sufi traditions that define the country’s past and shape its modern fiction, it further traces the spiritually, environmentally and politically holistic imaginings that contest a precarious reality.

The present article offers a preliminary description of the Judeo-Arabic variety spoken in Yefren (Libya), based on interviews collected from three elderly female informants. It analyzes the phonology and morphology of the dialect, attempting some sociolinguistic considerations on issues of dialect contact between Muslim and Jewish varieties of Libyan Arabic. In conclusion, the article discusses the position of Yefreni Judeo-Arabic within the context of Libyan and North African Judeo-Arabic as a whole. While belonging to the E/qa:l group of North-African Judeo-Arabic, a sufficient number of isoglosses allows us to posit the existence of two separate subgroups within Libyan Judeo-Arabic, here indicated as the Tripoli and Yefreni types.