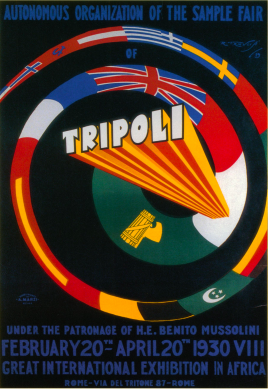 Extract: “The most significant exhibition to be organized in the Italian colonies was the Tripoli Trade Fair — an annual display of metropolitan and colonial goods held between 1927 and 1939. This series of exhibitions closely paralleled the representation of Italy’s colonies at similar events held in Italy and elsewhere in Europe during the same period. Indeed, all of these exhibitions were intended to communicate the value of Italy’s colonial possessions to a wider audience, while also establishing stronger economic and commercial ties between Italy and North Africa. However, the Tripoli Trade Fair also was a crucial medium through which an image of Italian society was disseminated to the indigenous populations of North Africa. There was, thus, a relationship between the Tripoli Trade Fair and its potential audiences that was more complex than that at fairs in the metropole. It not only represented Italian industry and culture in the colonial context, it was also the mechanism for a complex process of exchange between Italian and North African culture. Using a wide range of material — from postcards, posters, and publicity photographs to pamphlets and catalogues — this essay examines the Tripoli Trade Fair as a constantly evolving hybrid of metropolitan and colonial identities…”